Footballers & Poker: Samuel Eto’o Among Those Who Play For Charity 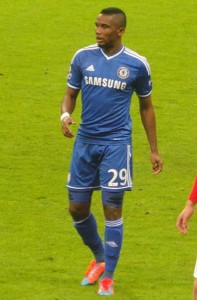 For many years now, there has been a noteworthy link between some of the world’s biggest football stars and the game of poker. Both retired players and those currently active in leagues around the world seem to gravitate toward the poker tables, whether just for fun, in a professional context, or, quite often, for charity. It makes a certain sense, really. Athletes are competitive by nature, and football stars tend to have expendable cash to support a hobby like high stakes poker, so it is perhaps only natural that many seem to be driven toward the world’s most popular card game.

There are several specific examples of football stars who have gotten into poker on a public stage, with perhaps the most prominent being Teddy Sheringham, the renowned English striker who spent his career moving between various English Premier League clubs. Following a very successful career, Sheringham got heavily into poker, and has made a great deal of money on various professional circuits and in prominent tours. A veteran of both World Series of Poker, WPT and European Poker Tour events, Sheringham can effectively be called a pro, and while his earnings certainly don’t match those that he made playing football, his skill might be comparable!

The English footballers have kept the tradition of dabbling in poker alive and well in the current generation as well, with several prominent players being known to participate in games, both for fun and for various promotions and charities. Most notably, in 2012, several stars from the Manchester United club participated in a Partypoker charity event called simply the « Partypoker.com Challenge. » As you can see here, the event saw a small team of pros including Darren Fletcher, Jonny Evans, Tom Cleverley, and others competing with each other with the assistance of poker pro Tony G. It was a fun promotional event in which the winner for the popular club took home a substantial cash prize for charity, and another great example of footballers in the poker world.

But for Chelsea supporters, the example that will hit closest to home is that of injured superstar Samuel Eto’o and his fairly extensive involvement with competitive poker. About a year ago, Eto’o helped to spearhead a major promotional charity event, patterning with former football star Jean-Pierre Papin to support a European Poker Tour event. Using their own stardom to bring in fan attention and poker players, Eto’o and Papin succeeded in raising considerable funds for six charities that, as the press release put it, might be little known to the general public. It was an outstanding display of just who far a football star’s celebrity can go in using public exposure and different forms of entertainment to do good, and it is ultimately a proud connection of the Chelsea club to the world of celebrity poker.

As the club continues its run in Champions League following a disappointing start, and continues to compete for the Premier League title, this is one more reason to love Eto’o, and to cheer for his speedy recovery from an injured hamstring!

Message from server: Not Found. Check in YouTube if the id chelseafc belongs to a user. To locate the id of your user check the FAQ of the plugin.